BY LESLIE GRACE | A! MAGAZINE FOR THE ARTS | MAY

When you walk into Barter Theatre's busy costume shop, you'll see racks of costumes neatly hung and labeled with the name of the play and the character, and all the equipment, such as dress forms, fabrics and sewing machines, you would expect to see in a design shop. You'll also see a small piece of gray fabric that is priceless to Amanda Aldridge.

That piece of gray fabric is priceless because it is the centerpiece of Aldridge's entire design scheme. She says that she had to lend it to the set designers, so they could mix the right color to paint the set and missed it while it was gone. 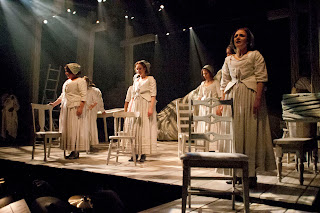 Every other color has to work with it. She has a large board labeled with every character's name and under each name is a group of fabrics that will be used to make their costumes, and on that board is that small, irregular piece of gray cloth.

"Everyone starts off all in that gray, except for Javert; he's in his colors. As you meet the principals and as Valjean escapes, they put on their colors," Aldridge says. "It was interesting balancing these colors. The reddest I used is the red of the rebels, but it's not as bright a red as I would use if I were just making red, white and blue rebel sashes. But in context of the other colors, it looks really red. It's interesting to balance the colors so that something pops out and doesn't look pretty — with this gray, dustier colors look really pretty with it." 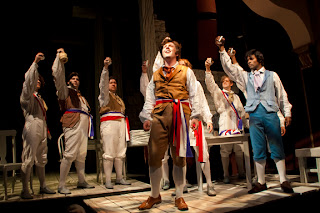 As the members of the ensemble, referred to as "ghosts" in Barter Theatre's production, take on roles such as factory workers, they add pieces of costume that are in a specific, carefully chosen color.
For example, when one actor becomes a prostitute, she adds a corselet over her gray top and skirt; another adds a shawl and one tucks her skirt up to show off her stockings.
"I don't want to represent the characters or try to pretend we're dressing the character. I'm trying to just give them a piece of the colors. I chose burgundy for the prostitutes, the students are in warm browns and the rebels are in red. They'll have a touch of the color, so they step out of being a ghost into the scene. I try to keep it as minimal as possible and just evoke the character; as opposed to pretending they are different people. We want to know throughout that they are ghosts and to see part of that ghost costume the entire time. Sometimes my instinct is to add this and this, so I'm trying to be consistent as I go through."
That consistency requires that Aldridge make numerous decisions throughout the process. "It's hundred and thousands of choices that get made with the designs, the fittings and the shopping, – creative ones and practical ones," she says. "For instance, Rick decided that he wanted Valjean to give Cosette a new dress when he rescues her, so we had to rethink design decisions on the dress. We needed a closure that Valjean could do on stage prettily and in time. Things that happen in rehearsal change the tack we take on something. We found out that Rick McVey (Javert) is going to have a chair broken over his back, so we added padding to his jacket. Some of the actors have to kneel, so we added padding to the pants."
There are so many pieces of costume, which are in various stages of completion, that Aldridge uses a database to track them. Les Misérables isn't the biggest show she's done in terms of the number of costumes – that honor belongs to "Evita" – but she had to create, buy or make, and track 555 pieces for "Les Mis."
The database includes descriptions, where each piece came from, whether it has been purchased or needs to be pulled from stock. If it's in rehearsal the database tracks whether it's a facsimile piece or the actual costume and whether it's been fitted to the actor.
After thousands of decisions, dying costumes and yards and yards of fabric seven to 10 yards a time, redesigning costumes because of changes in staging, discovering that one actor was allergic to wool so she had to find a different fabric for that coat, shopping, dying shoes and tracking everything, Aldridge is still excited about the production.

"I've never done anything quite like this, so it's interesting, challenging and fun." And she says she hopes that the audience gets "captivated and engaged by the work and doesn't necessarily analyze it. After the fact, they may go "oh that's cool,' but hopefully the experience is more visceral, and the costumes help to tell the story. That's the most important thing to me — that the costumes don't distract and draw attention but tell the story.


"Of course, it would be lovely if they felt like the costumes are gorgeous to look at," she adds.


Article appeared in the May issue of A! Magazine for the Arts. By Leslie Grace.

More of the story: