Richard Rose (Director/Producing Artistic Director, Barter Theatre) Serving in his twentieth season as only the third artistic director in Barter’s illustrious 80-year history, Rick has quadrupled Barter’s annual attendance to over 163,000. Barter’s audiences know Rick's work well. His original adaptations of plays have been extremely popular and include It’s a Wonderful Life, A Christmas Carol, Dracula! and, acknowledged as one of the best new regional theatre plays of the year, Frankenstein. Triumphs as a director from 2012 include Tarzan, 9 to 5: The Musical and Sherlock Homes and the Christmas Goose. Rick has served on many of the region’s and Virginia’s non-profit boards and currently serves on the Executive Committee of the Virginia Chamber of Commerce. Rick did post-graduate work at New York University, has a MFA from the University of California, Davis, and BA from St. Norbert College, DePere,Wisconsin, where he was honored with a “distinguished achievement award inhumanities.” Rick was also one of the first-ever recipients of the Town of Abingdon's Arthur Cambell Award for extraordinary contributions to this community.

Amanda Aldridge (Costume Designer/Choreographer) has been at Barter for twenty seasons; her work includes more than 160 productions. It is a joy for Amanda to be able to combine her two passions. Her choreography and costume designs at Barter include Cabaret, I’ll Never Be Hungry Again, Disney’s Beauty & the Beast, The Wizard of Oz, Joseph…, Evita, Thoroughly Modern Millie, Singin’ in the Rain and Gypsy; Amanda also choreographed Zombie Prom, 9 to 5, The Full Monty and The Who’s Tommy. Other Barter costume designs include Little Women, Sherlock Holmes and the Case of the Christmas Goose, Dracula!, Gigi, Phantom, 1776 and Keep on the Sunny Side. Previously, Amanda studied in New York and worked as resident costume designer and choreographer at the American Stage Festival in NH and Merrimack Repertory Theatre in Massachusetts.

Alain Boublil’s (Original French Lyrics) first musical, La Revolution Française in 1973, marked his transition from songwriting to musical theatre and the start of his collaboration with Claude-Michel Schönberg with the hit album that became the first ever staged French musical. His idea of writing a musical version of Les Misérables brought them together again in 1978. The acclaimed show was written over a two-year period and recorded as an album before its opening at the Palais de Sports in Paris in September 1980. The show has subsequently opened in 19 countries and 14 languages.

Parris Cromer, (Dance Captain/Ensemble) a graduate of Penn State University, is honored to be back performing in Barter’s 2013 season. Originally from Washington, D.C., Parris has had the pleasure to sing for President George W. Bush, as well as world-renowned mezzo-suprano Denise Graves. She has performed at the Kennedy Center, Constitution Hall, and is a recipient of the Robert J. and Doris P. Prindle Memorial Award and the Lauren M. Becker Memorial Award in creative arts. Favorite credits: Crystal (Little Shop of Horrors), Spat Palazzo (Sugar), Acid Queen (The Who's Tommy) and Serena (Porgy and Bess). Parris sends special thanks to her family and niece Ee’lon for all their love and support.

Lee Harris (Musical Director) is thrilled to be back at Barter Theatre as resident musical director. Past Barter productions and Barter national tours: Harry Chapin: Remember When the Music, Always…Patsy Cline, Forever Plaid, Legally Blonde: The Musical, Avenue Q, Zombie Prom and Tarzan. National tours: Little Women; Altar Boyz; Bye, Bye Birdie; Civil War Voices, Miracle on 34th Street and The Radio City Christmas Spectacular featuring The Radio City Rockettes. Regional: The Light in the Piazza, Cinderella, The Wild Party (Lippa), The Sound of Music, Annie, The Wild Party (LaChiusa), The Music Man, Hairspray. Lee thanks Rick Rose for this amazing opportunity. “All my love to my family back in Tennessee and Texas.” 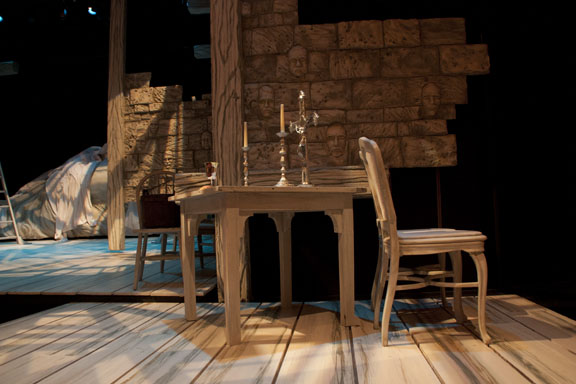 Herbert Kretzmer (Lyrics) was born in South Africa and immigrated to London in 1954. He has since pursued twin careers as a newspaperman and songwriter. He joined the Daily Express in 1960 and later became its drama critic, a post he held for 18 years. Since 1979 he has been writing TV criticism for the Daily Mail and has won, in this capacity, two national press awards. As a lyric writer he wrote weekly songs for BBC-TV's That Was The Week That Was. He won an Ivor Novello Award for the Peter Sellers/Sophia Loren comedy song "Goodness Gracious Me." Tony Award, 1987, Best Score, Les Misérables.

Miles Polaski (Sound) is the resident sound designer at Barter and is delighted to return to the place at which he was a sound designer and actor eight years ago. Miles has worked as a freelance designer, composer, musician and DJ in Chicago, where he was a resident designer with 2nd Story and Collaboraction. He has been nominated for many awards and citations, and in 2010 he received a Joseph Jefferson Award for his design of RedTape's Mouse in a Jar. Miles has had the pleasure of working on many shows with Chicago's best theatre companies including Chicago Dramatists, Steppenwolf, The Goodman and Fox Valley Rep.

Claude-Michel Schönberg (Music) is a successful record producer and songwriter who began his collaboration with Alain Boublil in 1973. In 1980, after two years' work on the score, Mr. Schönberg and Mr. Boublil's musical Les Misérables opened in Paris, where it was seen by more than 1.5 million people. He won two coveted Tony Awards, for Best Score and Book, for the Broadway production of Les Misérables and a Grammy Award for the Best Original Cast Recording, which he co-produced with Alain Boublil. His score for Miss Saigon, again written in collaboration with Alain Boublil, is now repeating the international success story of Les Misérables.

Helen Stratakes (Props) is happy to be at Barter for another season. Starting here as an intern in 1989, she has worked with Long Wharf Theater in New Haven, CT and Denver Center Theater Company in Denver, CO. Helen’s favorite shows here at Barter Theatre include: Tarzan, A Walk in the Woods, Golf with Alan Sheppard and Around the World in 80 Days. She loves to have the opportunity to work with her husband Glenn, doing work that is truly part of her.

Marcia Willard (Wig Master) is happy to be working her first season at Barter Theatre. Originally from Washington State, she traveled to Oregon for her bachelor’s degree. Her last three summers have been spent in Utah, working for the Utah Shakespeare Festival. She earned her MFA in wig and makeup design last spring from the University of Cincinnati. She is excited to contribute and become part of the Barter Family.


Meet the Stage Managers
Beth Crock (Assistant Stage Manager) is from Denver, Colorado, but spent five years in the UK where she received her BA (Hons) in stage management and technical theatre from the Guildhall School of Music and Drama. She also spent time there working freelance in stage management on a variety of productions. Favorite jobs have included working for Opera Holland Park, Mansfield Palace Theatre, Theatre Royal Bury St. Edmunds and Pitlochry Festival Theatre. This is her second season with Barter Theatre.
Cindi A. Raebel (Stage Manager—Les Misérables) Wow, it’s hard to believe that this is her 8th season at Barter Theatre, and boy is she excited to help celebrate Barter’s 80th season. This year she is also celebrating her 20th year as a proud member of Actors’ Equity Association. She is honored and privileged to work with such talented people and is looking forward to sharing this show with you.