The comments keeps rolling in.

Watch how excited people were when they came out of the theatre here.

In more than two decades of reviewing Barter plays I have never seen a musical that thrilled me more than the current Main Stage production of Les Misérables or simply Le Mis as it is popularly called. Forget the movie; filled with bored-looking and obscenely overpaid actors, it comes nowhere close to the spirited Barter production with its large cast of seasoned resident actors joined by a host of vibrant and talented newcomers, none of whom are bored or boring. I really love it when actors really give it their all and in this play they do it absolutely in spades.

Pat McRoberts, who appeared at Barter 15 years ago, is in the lead role as Jean Valjean and his acting and singing seems to set the bar for the entire cast—and it is a very high bar. Equally impressive is Rick McVey as Valjean’s nemesis, Javert. Hannah Ingram is mesmerizing as Fantine and if I have to find any fault at all with this play it is that Ingram, as Fantine, has far too few numbers.

Holly Williams as the adult Cosette also gives audiences a wonderful performance worthy of applause, speaking of which the production that I saw was interrupted by wild applause at least five times by the packed house.
—Robert McKinney

"I must tell you, I have been to several productions at Barter (Always...Patsy Cline, Keep on the Sunny Side, Evita, Sweeney Todd), but Les Mis was by far the best one. The singing was amazing. I personally think it was better than the NYC Broadway show I saw a few years ago. I liked the decision to use white. It really made a difference to me and it didn't feel so dark. I am actually going to come see this one again" —Leslie A Lawson, Kingsport, TN via email.

I have been telling EVERYONE about Les Mis!!  Only problem is that there aren't words expressive enough to describe the experience!! KUDOS to all involved with the production.  Thank you all for what you do and touching my life. —Shelley L. via email.


Thank you Barter Theatre for delivering a wonderful performance of Les Misérables! The cast members and musicians have obvious enthusiasm for the material which shines through in their performances. The costumes look great and the make-up artists did a nice job, particularly with Pat McRoberts and Erin Parker. The set is magnificent. I enjoyed watching each and every actor. Pat McRoberts hit a home run as Valjean. His facial expressions and singing style conveyed a deep understanding of the character. Hannah Ingram gave me chills with her interpretation and performance of the song "I Dreamed a Dream." Erin Parker is an amazing Madame Thernardier! She conveys the right amount of obnoxiousness, coquettishness and greediness in creating a character that we "love to hate." —Ginger Jonas Largen via Facebook.

Les Mis is even better the second time around! We used our May 21 passes for last night's performance, and my husband and I agreed that we enjoyed the show even more. It is evident that the cast has worked very hard to make this a memorable performance. We definitely will recommend Les Mis at Barter to everyone! We enjoyed watching all of the actors last night, but wanted to give special recognition to Rick McVey, Justin Tyler Lewis, Michael Poisson, and Erin Parker. Mr. Poisson and Ms. Parker steal every scene in which they appear as the Thenardiers. We look forward to seeing both of them in "Southern Fried Funeral"! —Ginger Jonas Largen via Facebook


"I've seen many productions at Barter, but this time they have outdone themselves! Rick McVey (Javert) rocks!"
—Glen 'Skip' Skinner via Twitter


"I was moved to tears while listening to Pat McRoberts sing today. All involved in today's performance of Les Misérables were awe-inspiring! It is a simply beautiful production! I've attended dozens and dozens of plays in the last 20 years and this play surpassed them all. My husband saw Les Misérables on Broadway in NYC, and I saw it at Fox Theatre in Atlanta. We both agree that Barter's production ranks the highest! Thank you, Barter Theatre for delivering excellence each and every time."
—Sara Stalnaker Hardin via Facebook


"Bravo to the cast and crew of Les Misérables! Pat McRoberts' portrayal of Jean Valjean was exceptional! "Bring Him Home" was perfectly sung and beautifully acted. It was my favorite scene of the day."
—Cameron Botts Burton via Facebook 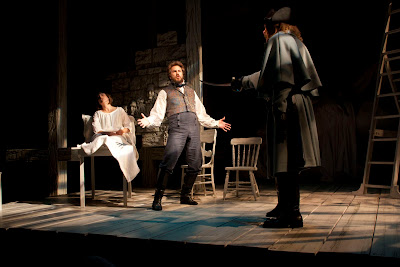 A lifelong Barter attendee, I have seen few shows that compare to this production. Even though it was the first show, it was a stupendous performance. This was my first live musical, and I am so glad I came! Bravo to the cast and crew. Wonderful job! Thank you for a great afternoon at Barter.
—Deborah Blankenship via email

If you go through life and experience only one live stage production, let it be Les Misérables at Barter Theatre in Abingdon, VA. We have seen some really good plays there but Les Miserables top them all. It was even better than to movie! —Page 21, North Carolina, via TripAdvisor

Having seen a number of NYC Broadway shows, I can honestly say this superb production is on par with any other professional production in terms of direction, acting, vocals, music (featuring a live orchestra) set design and lighting. (And at half the price of a Broadway show!) A nod also to the ushers and box office staff who were ever pleasant and helpful. Being a devotee of the play and musical score to begin with, I was captivated, however my 15 year old son (no real fan of musicals) whispered at one point, "Please quit humming; I am trying to listen to the music!" —Sali G, Boone NC, via email.


I was absolutely awed by the performance of both the cast and the musical ensemble.  Even the actors and actresses who I don't think of as being singers, really displayed their talent in singing yesterday.  I was totally amazed at the talent onstage.  As usual, Barter is excellent. —Shirley B. via email


My wife, brother in law and I saw this on Tuesday the 21st of May at a matinee and were very excited to see it. Rick Rose has another masterpiece to add to his already great resume'. Rose did something that I had forgotten about since I haven't actually done a theatre production in a number of years. He had the actors, in large part, become a canvas for our imagination as we watched the play. The actors costume's were mostly white and, at first, I had question's in my mind as to why. It soon became clear that my idea that the whole show would be told in a dark and perilous atmosphere was simply my idea. What Rick Rose did was what theatre has been doing for centuries, he allowed my imagination to kick me into the period that I wanted to see. He did not lay everything out for me as if I were a child, he forced me to, again, be educated through the process of live theatre. Thank you Mr. Rose. Thank you cast for an outstanding production that was more than professional and also a learning experience. Rick McVey is, as always, remarkable to watch as he completely wraps himself in the character he is playing.
If you have the chance and are local or if you are simply traveling through the Abingdon VA area in Southwest VA, you will be happy that you gave yourself the gift of seeing 'Les Misérables.'" —David B. via email

Please leave your comments below! We'd love to hear what you think about Les Mis at Barter!